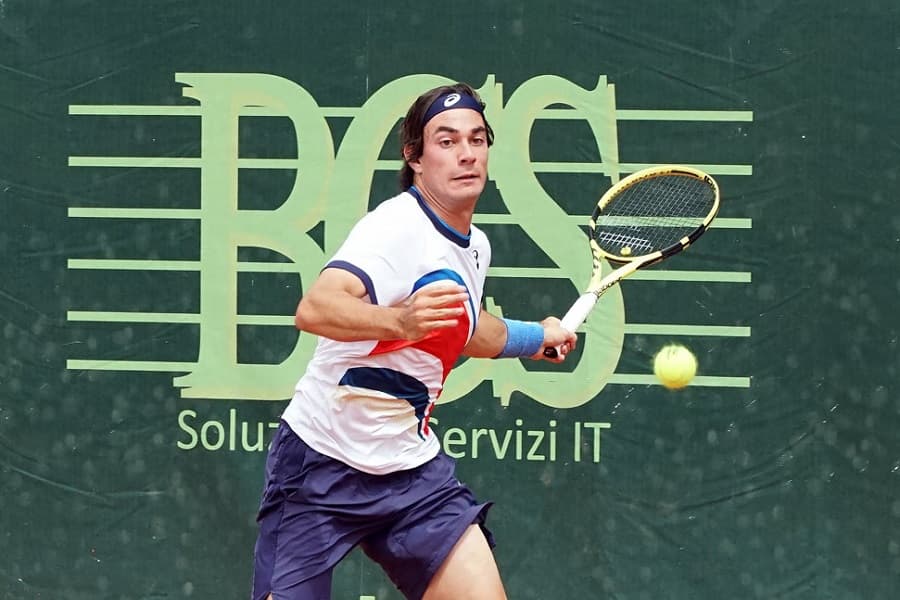 The best things sometimes come from the most humble choices. By virtue of his status as a young promise of Italian tennis, Giulio Zeppieri had obtained a wild card for the main draw of the ASPRIA Tennis Cup – BCS Trophy (€44,820, clay). However, in consultation with coach Piero Melaranci, he chose to forfeit and play the qualifiers. “Giulio has been out of action because of an inflammation in his knee from which he is still suffering,” Melaranci said after the 7-5 6-3 with which the Lazio player overcame Francesco Passaro, “otherwise we would have already played in Parma. He carried the problem for a while, stopped and then had therapies with Dr. Pierfrancesco Parra. The stop of almost two months is essentially due to that, now we will try to play as much as possible. The desire to play a lot is at the origin of the decision to give up the wild card.” In the match that brought professional tennis back to the ASPRIA Harbour Club after two years, Zeppieri administered superiority over Passaro, class of 2001 like himself and ATP number 743, with sufficient ease. “He struggled a bit, but certain difficulties were expected,” Melaranci continued, “we chose to play the qualifiers precisely to play as many matches as possible, get into condition and manage the second part of the season in a calm and intense way. Since a few days we have also intensified our athletic work.” To center a place in the scoreboard he will have a not easy commitment against the Czech Michael Vrbensky (No. 1 on the scoreboard, who did not leave a single game to Edoardo Lodovico Cattaneo).

Speaking of the opponent, Melaranci professes moderate optimism. “We know him. We have never played against him, but we happened to train together, although on a different surface. He is a good player, dangerous, but if Julius does his I think he has a lot of chances to win. Let’s see, the thing that interests me most is the overall condition.” Filed the events of Rome-Garden, a delicate passage but one from which much can be learned, Zeppieri is ready to start again, and his longtime coach has clear ideas. “The current goal is to have continuity, to play games, to train well and with due intensity. Once that is achieved, the chance to get to play Slam qualifiers can be a first goal.” Zeppieri will be the only Italian in the qualifying round, scheduled for Monday morning: on Sunday came the defeats of Stefano Napolitano and Jacopo Berrettini. The former surrendered 6-4 6-1 to Croatian Ajdukovic, while there is more regret for the younger brother of the Italian number 1, beaten 7-5 7-6 by Frenchman Furness, just as Matteo was playing the final at Queen’s. Down 7-5 2-0, Berrettini picked up five games in a row, had a setpoint, but failed to extend the match to the third. The tie-break was then fatal to him. At 3 p.m. the main draw will start, with the first four matches scheduled. On Center Court will be the match between Morocco and Tunisia, with Elliot Benchetrit and Malek Jaziri on the court. Not before 5 p.m., Former top-30 ATP Guillermo Garcia Lopez will try to surprise U.S. Ulises Blanch, the No. 3 seed. Public admission (within the 25 percent limit) will be free until Friday, June 25, while on the last two days, given capacity limits, access will be available by purchasing a Hospitality Coupon, available in SILVER or GOLD. All information can be found at www.aspriatenniscup.it. For more details about Coupon Hospitality, you can email ticket.atpmilano@gmail.com