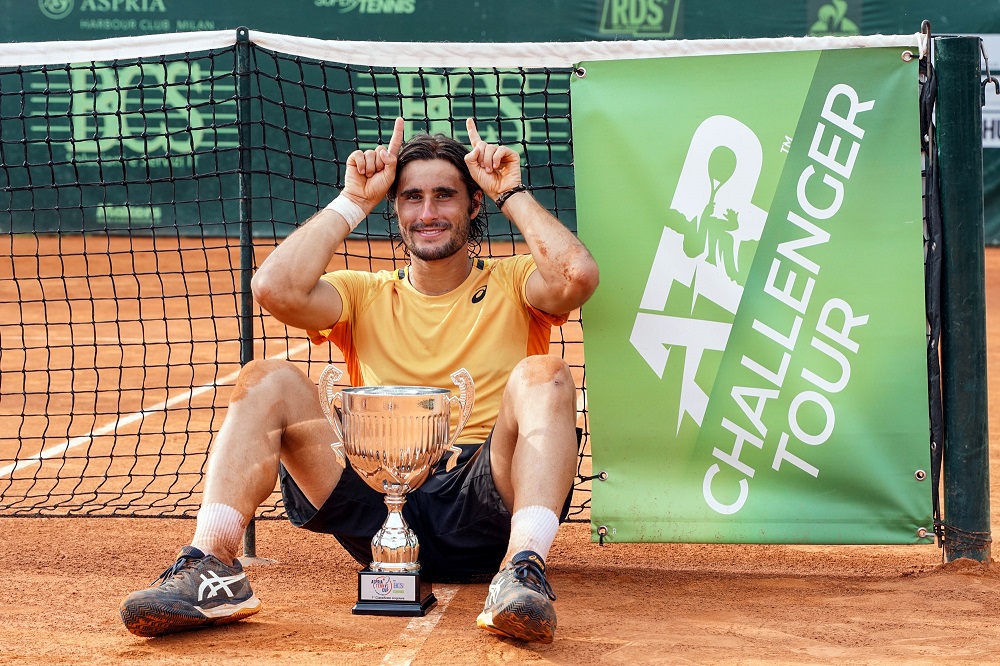 Gian Marco Moroni is a big basketball fan. During the week of the ASPRIA Tennis Cup – BCS Trophy (€44,820, clay court) he often wore his Brooklyn Nets cap. In basketball slang, to retrieve a ball from the rubbish can means to revive actions that seem to be over. The concept can be borrowed in tennis, to emphasise an extraordinary defensive phase. And it was precisely the impressive generosity of the Roman, indomitable in chasing down the most difficult balls, that was one of the keys to success against the favourite Federico Coria, tamed with a clear 6-3 6-2. The symbolic point of the match came at 6-3 2-1: in that game, the Argentine went 0-40 on Moroni’s serve. After cancelling the first two, the Roman played an exchange of enormous sacrifice, putting off any attack by Coria. With the last drop of energy, he forced the Argentine to play a smash. And Coria shot it out. In the next game, another immense defensive phase led Coria to an error on the break ball, this time in favour of Moroni. The match ended there. For Moroni it all came at once: first Challenger title and first win against an ATP top-100. “But for me it doesn’t change much,” says Moroni, whose ambition is well known, “the road is still long. The positive thing about this tournament is the confirmation that the work with my staff in Foligno is the right one. We must continue on this road and do the best we can, because the level will rise and I will have to improve’. In short, a starting point. Despite the strong desire to win his first category tournament, Moroni approached the final with due calm. 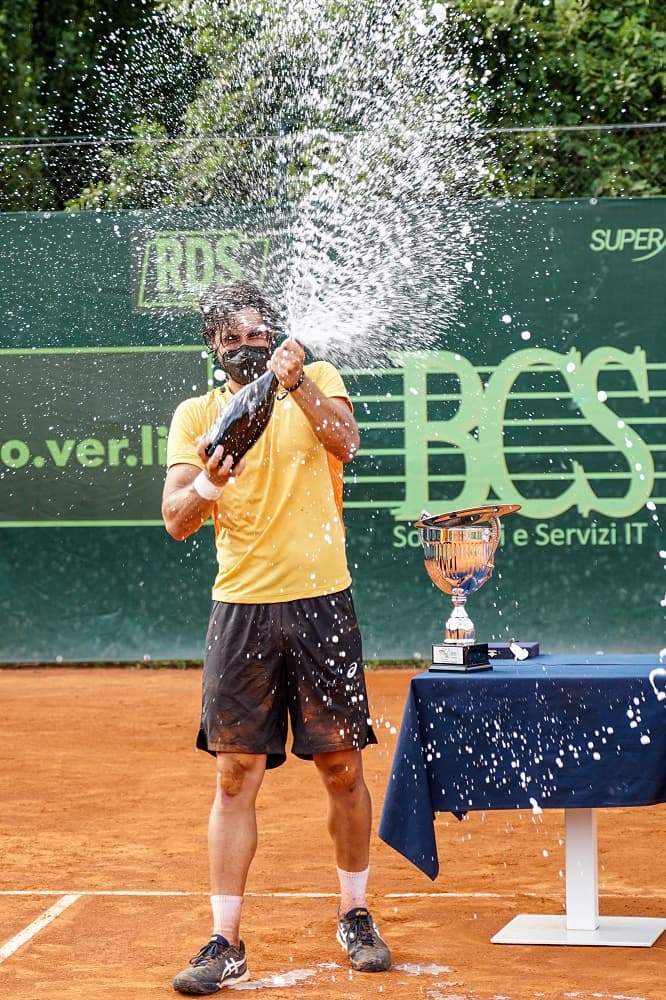 A LITTLE TENSION, THEN FEAR PASSES

‘As before every match, I allowed myself a pre-match nap,’ he says with a smile, ‘this helped me to relax. Indeed, he entered the game well and with clear ideas. “The idea was to play as soon as I had the opportunity. Against Coria you can’t afford to be in a hurry. His strength is consistency in the exchanges. In fact, as soon as I got into the dribble it was tough. So I had to take the point, but in the right way and at the right time. The first break came in the eighth game, with a beautiful point under pressure. The match could have turned in the next game: on 30-30, Moroni rose to setpoint with a great backhand pass, then at the crucial moment committed two double faults in a row that gave Coria a chance to get back into the match. “At that moment I got caught up in the tension. Then I took a deep breath, relaxed and resumed what I was doing.” Moroni cancelled the break ball with a beautiful volley, then the set ended with a bunt by Coria, repelled by the tape. In the second set, as mentioned, in the rare moments of difficulty Moroni stifled Coria’s motivation with an extraordinary defensive phase. After the last point, the Roman lay on his stomach on the clay court. An immense joy, shared also with his parents (his father stayed until the end, his mother had to leave in the last days), but experienced as a stage of passage. Indeed, as a starting point. ‘This year I had already experienced so many weeks in which I thought I could make it to the end,’ says Moroni, ‘but here in Milan I was able to live with tranquillity and in a context of normality. Because of the virus, I lived many weeks alone where I only thought about tennis. The level was there, but this week I was simply more relaxed and this allowed me to play the important points better. It was a natural process, there was no specific moment when I started thinking I could win”.

Moroni’s success is the fourth for Italy at the ASPRIA Tennis Cup – BCS Trophy, allowing us to join Spain as the most successful country, leaving Argentina behind. Among other things, Moroni interrupts a tradition that in the last editions always saw the number 1 seed win. Federico Coria (who will play in Wimbledon on Tuesday) did his duty until the final, but perhaps he paid the price for the tiredness of 10 matches in less than two weeks. He certainly suffered from the quality of Moroni’s tennis, which is worth much more than the 218th position he will celebrate from Monday, not too far from the best ranking (no. 209) of last year. In recent years, ASPRIA Tennis Cup winners have done excellent things: the hope is that Moroni can emulate the successes of the likes of Delbonis, Cecchinato, Pella and Djere. “I hope I won’t see you again,” he joked during the prize-giving ceremony, just before uncorking the Fantinel-branded champagne: he meant that he hopes to start on the major circuit. Certainly, he will not easily forget the week at the ASPRIA Harbour Club. The week in which he rediscovered the sweet taste of victory. Great satisfaction for the organisers, who were able to put on an event with the usual quality standards in record time. An important signal for the future of a tournament that is now a joyful tradition in the early summer calendar. From tournament director Massimo Lacarbonara to organising director Carlo Alagna, passing by ASPRIA Harbour Club General Manager Roberta Minardi and main sponsor BCS president Giuseppe Fumagalli, the smiles told more than a thousand words. Milan has started again. And Gian Marco Moroni has chosen Milan to start designing his future. 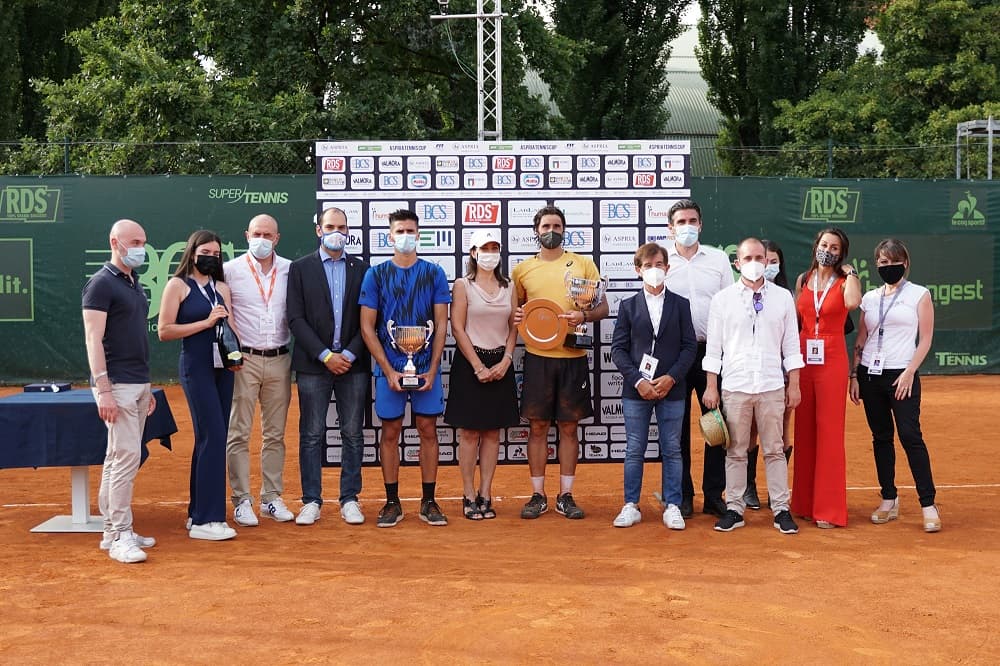