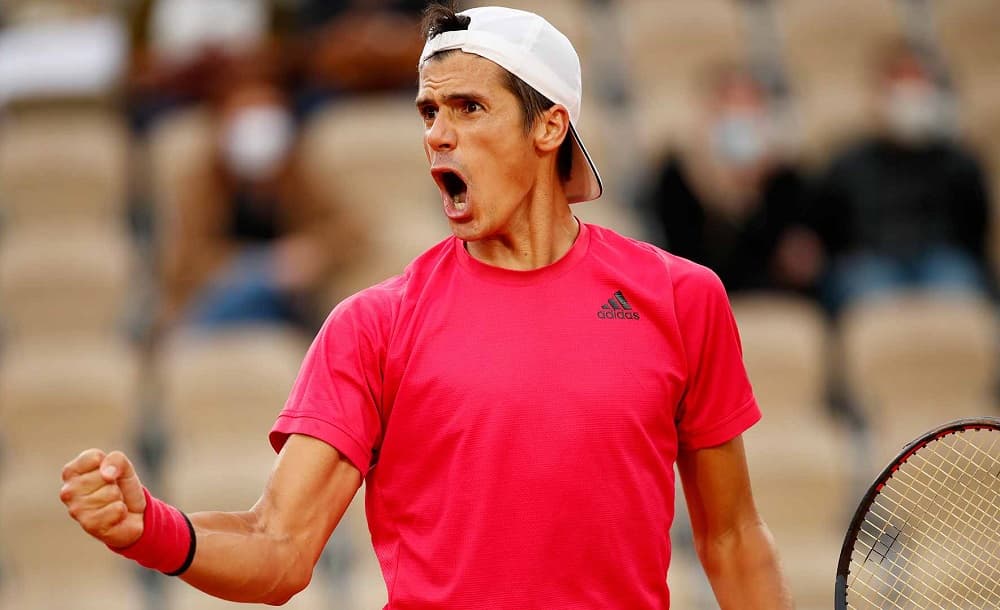 A famous proverb claims that there is no two without three. The last two editions of the ASPRIA Tennis Cup – BCS Trophy have hosted as many top-100 players: Laslo Djere in 2018 and Hugo Dellien in 2019. Both lived up to the predictions, winning the title within hours of their Wimbledon debut. After Marco Cecchinato’s forfeit, the mandatory favorite in 2021 will be Argentina’s Federico Coria. The latest ATP rankings place him at No. 94, and we recently saw him challenge Matteo Berrettini at Roland Garros. For years, Fefo (that’s his nickname) lived in the shadow of his brother Guillermo, former world No. 3 and one of the strongest players at the turn of the millennium. “I used to go to tournaments, they would read the last name and think Guillermo was there,” he says, “then at the end of the match they would always interview me, even in defeat, ignoring my opponents. It was not easy for him to bear the weight of so many expectations, combined with merciless comparisons. It took time, but now the embarrassment has turned into pride, and the knowledge that he can be a very good player. Last September he broke into the ATP top-100 and hasn’t let go. Coached by Andres Schneiter (an Argentine technician of Italian origin), he will be the star of the 15th edition of the ASPRIA Tennis Cup – BCS Trophy. He will try to give the trio to Argentina, which already boasts the titles of Federico Delbonis (2015) and Guido Pella (2017). Should he succeed, the South American country would equal Italy behind Spain, the country-leader with four titles. Coria will be the compulsory favorite, but the pool of players presents several reasons for interest. The player with the greatest pedigree is U.S. Jack Sock, who only three and a half years ago was among the top-10 and playing the ATP Finals. He is also a great doubles player, complete with a Wimbledon title and moved up to No. 2 in the specialty rankings. Since then he has had a slump in results that has pushed him away from tennis that matters. He is currently in 248th position, but has every intention of rising again. He proved that these days by winning the Challenger tournament in Little Rock, USA. The Harbour stage could be an important step on his path to resurgence. The roster will then be reinforced by several players with a past among the ATP top-100: the ASPRIA Harbour Club will be able to admire the class of Guillermo Garcia Lopez (former No. 27), Teymuraz Gabashvili (43) and Portuguese Gastao Elias (57) and Pedro Sousa (99). Among the most anticipated players is Indian Sumit Nagal, current No. 143, who two years ago went all the way to the semifinals (he was defeated by Serbian Petrovic). For now, Italy is assured of having Andrea Arnaboldi on the draw. The Canturino player is recovering from a back injury that has held him back since last April, and he will be well determined to do good things. By the way, he has already played very well in the past at the ASPRIA Tennis Cup – BCS Trophy: in 2013 he came within a step of the final, losing 7-5 in the third to Volandri, while in 2018 he went all the way to the quarters. Taking a look at the entry list, Riccardo Bonadio might have some chance of direct admission. There is also anticipation for the names of the wild cards and the outcome of the qualifiers, which will put an additional four main draw spots up for grabs. In short, there are all the prerequisites for a tournament of high level and full of points of interest, moreover played in an enchanting and constantly changing setting. The appointment is at the ASPRIA Harbour Club in Via Cascina Bellaria from June 20 to 27.