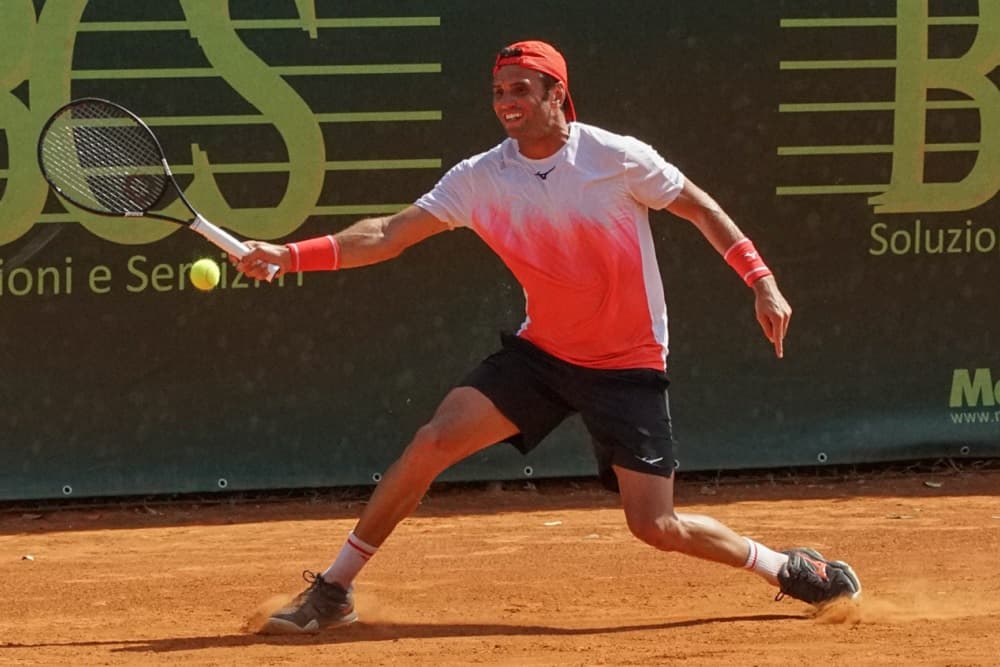 Only two years ago, Malek Jaziri was celebrating a best ranking. At 35 years of age, he had finally reached the ATP top-50 mark. Then a little bit of everything happened. “First I made some mistakes, like going to play in South America instead of the Middle East, then I changed racquets. Finally I got injured and lost my ranking. In 2020, as if that wasn’t enough, the pandemic came.” Recovering was not easy, but this is (also) how he explains his current position number 286 in the ATP ranking. The Tunisian came to the ASPRIA Tennis Cup – BCS Trophy (€44,820, clay) coming off six consecutive defeats, so he approached his match against Elliot Benchetrit, a curious Maghrebi derby (Benchetrit is French, but he chose to play for Morocco), with a hint of concern. Jaziri showed that the shots are still there, winning with a clear 6-4 6-1. At the end of the match, disappointed with his performance, Benchetrit argued heatedly with his team. Normal, because Jaziri challenged him with his varied and talented tennis. Technically, a player in another category. “When you lose you often lack confidence and are full of doubts, plus in Challengers there are no easy matches. You find young and experienced, all motivated to play at a high level,” says the Tunisian. “Also, for me it is not easy: I do well on clay, but my favorite surface is concrete. Unfortunately, there are no tournaments on cement at this time, only in the United States, but that is too far away. So I chose to stay in Europe. I feel great here in Milan, all the people on the staff are incredibly friendly and do everything they can to make us feel comfortable, despite the difficult situation.”

He reciprocated with an excellent performance, moreover, showing more than good physical condition, considering the heat and 37 years of age. “I’m working hard,” he says, “I think I can get back to the top 100, it’s a dream and I’m fighting for that. People think I am at the end of my career, maybe they are right, because I don’t know how much longer I will play. I hope as long as possible, also because in tennis there is no age. There are players over 35 who achieve great results, and this convinces me that I can do it. I take it as a personal challenge. I am motivated, but to get ahead you have to appreciate tennis. On my side I have experience but I have to improve many aspects. Physically I have improved, however there are still many things to work on, also because during the virus break I lost my rhythm. But now it is water under the bridge and I only think about the future.” Despite having won more than 100 matches on the ATP circuit and having infinite experience, Jaziri surprises with his joviality. Just give him a little input, and he is a torrent of words. Since last December, he has chosen the Novak Tennis Center in Belgrade as his new training base. “Great experience; Djokovic invited us and I liked him very much. I respect him, he is a great example and he helped me to keep my motivation high. He is incredibly motivated and I hope I can come back to the top.” Meanwhile, tennis Tunisia is laughing mostly thanks to Ons Jabeur, who just 24 hours earlier won her first WTA title in Birmingham. “Since I entered the top-100 ATP, about 10 years ago, tennis has brought joy to people. Today it is very popular and it is constantly improving. I have known Ons since we were young and I want to congratulate her: she has worked hard and deserves this success, as does her husband and Issam Jellali, who is on her staff after playing with me in the Davis Cup.” If there are no surprises, in the second round he will take on baby phenom Holger Rune, class of 2003, almost 20 years his junior. “He could be my son! – jokes Jaziri, who already has a couple of real children, Malek Jr. age 5 and Mayar just 3 months old – I remember when I was his age, I was motivated and with big dreams. He won so much as a junior, definitely has big goals and aims to become the strongest of all. It will be a good experience, I will prepare the match in the best way even if I don’t look too much at my opponents: I think mostly about myself: tennis, physique and mind.”

ZEPPIERI QUALIFIES, SIX ITALIANS ON THE BOARD

The main draw of the ASPRIA Tennis Cup will have one more Italian: Giulio Zeppieri, author of a very good match against Michael Vrbensky, was added to the five already in the main draw. The Lazio player won 7-5 6-2 but was liked for his humble attitude, and the way he came out of the quicksand of the match. Immediately ahead 4-1, he got caught up to 5-5, then played an eternal 11th game in which he nullified four break points that could have been fatal, a couple of them in a scrappy way, with some great defensive recoveries. Having escaped danger, he in turn snatched service from Vrbensky at the fourth setpoint, then dominated the second set. Now he will face former ATP top-50 Teymuraz Gabashvili, a former ATP top-50 and winner of this tournament in 2008, when Zeppieri was six years old. It will be a busy Tuesday: the first round will be completed, with as many as 12 singles matches. All competing Italians will be on the court. The highlight is certainly the effort of Riccardo Bonadio, opposed to the favorite Federico Coria. Before him, Andrea Arnaboldi, Raul Brancaccio, Gianmarco Moroni, Luca Vanni and Zeppieri himself will take the court. A day to enjoy, in which there will be free admission (and it will be so until and including Friday 25).