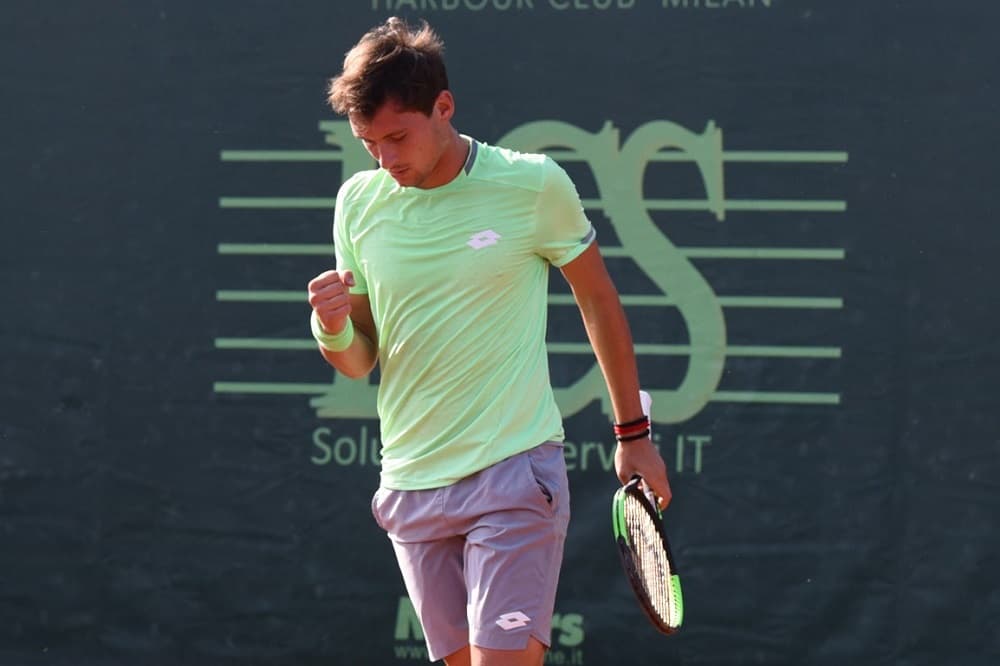 The ASPRIA Tennis Cup – BCS Trophy started rather well for the Azzurri. The defeats of Riccardo Balzerani and Alessandro Bega in the qualifiers were contrasted by the successes against ranking of Francesco Forti and Riccardo Bonadio. Forti (No. 427 ATP) gave up just five games to the experienced Tomislav Brkic (No. 297) and will return to the court as early as Tuesday against Dominican Jose Hernandez Fernandez. Bonadio (No. 377 ATP) crashed Croatian Borna Gojo (No. 313), who, moreover, is five years younger than him, by a distance. The boy from San Vito al Tagliamento, who has been able to play so many Challengers thanks to his excellent ITF ranking, showed – as usual – an excellent one-handed backhand and picked up an important success ahead of a fascinating second round against Hugo Dellien, the No. 1 seed. Closing the day, surprising outcome of the Italian derby between Julian Ocleppo and Raul Brancaccio, not so much because the player worse placed in the rankings won, but because of the way the 6-1 3-6 7-5 for Ocleppo matured. Having won the second set, Brancaccio was totally in control of the match. Ahead 5-2, with a two break lead, he plunged into a final blackout that allowed the Piedmontese to pocket five games in a row, to the satisfaction of his coach, former doubles player Alessandro Motti. Ocleppo must be credited with some great tennis in the final (just as the nearby ASPRIA Harbour Club swimming pool had set off some disco tunes), as well as remarkable psychological resilience. He had not always succeeded in the past. In the second round, the son of former top-30 Gianni will face Pedro Sousa (who followed the match along with coach Rui Machado). Other matches include the successes of Martin Cuevas (Pablo’s younger brother) and Marcelo Arevalo, a Salvadoran tennis player who is alternating between singles and doubles (in which he is world No. 70). Tuesday’s program is definitely interesting: the highlight will be the aforementioned Musetti-Daniel, but there will also be the debut of Giulio Zeppieri, another golden boy of Italian tennis, fresh from a splendid semifinal in Parma. For him there will be qualifier Molcan. Curiosity also surrounds the performance of journalists Carlo Annovazzi and Giovanni Battista Olivero, who emerged from the rodeo played a couple of weeks ago. They will face off against Bonadio-Heyman-another attraction of a full day of tennis, kicking off at 10 a.m.