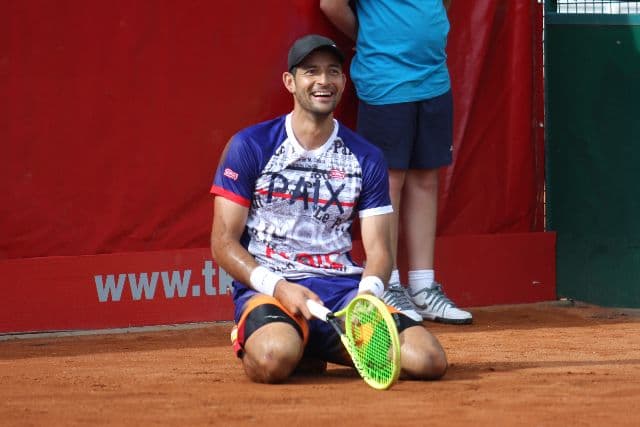 It takes courage to keep pursuing “Plan A” when the alternative path offers more satisfaction, all the more so when your career has not given you great satisfaction. However, there is something that drives Marcelo Arevalo to hold on and chase a dream with racket in hand, despite the ATP ranking that sees him at number 296 (while he is 70th in doubles). In the stifling heat of Milan, he reached the third round at the ASPRIA Tennis Cup – BCS Trophy (€46,600, clay). On Court 13, he held off Australia’s Maverick Banes with a score of 6-1 6-4, picking up valuable points for an upward climb that promises to be difficult. But he, with a difficult history behind him, is not giving up. As a junior he was No. 8 in the world and was strong and promising. Among his opponents were Grigor Dimitrov and David Goffin, who a few years later would face each other in the Masters final while he was entangled in minor tournaments. “Here in Milan, besides the heat, there is great humidity,” says Arevalo, who will face Alexandre Muller in the round of 16, “however, it is the same for all players. I think winning the first set gave me a significant advantage mentally.” At ASPRIA Harbour Club, the Salvadoran also plays the doubles tournament, in which he is favored along with Miguel Angel Reyes Varela. One wonders how long he can continue in both specialties, all the more so when the ranking differences are so obvious. “Last year I was No. 139 in singles, but then it didn’t go the way I wanted. I had a series of back injuries and could not play at 100 percent. I didn’t stop playing, but I wasn’t good. Unfortunately, I dropped around number 350,” Arevalo says, “now, thank God, I’m back on track. I have a good coach, Yari Bernardo, and at this stage of the season on European clay I have won a couple of good matches. There is great motivation to continue playing well in singles.”

THE FORTUNES OF GOFFIN AND DIMITROV

It will not be easy, not least because of a difficult past that took him from junior phenom to mere student in the United States (he majored in Business Administration at Rice University in Texas). When asked what he thought when Dimitrov-Goffin faced each other at the Masters, the memories come flooding back like a river. “As a top-10 junior I was very motivated, but unfortunately I didn’t have the same support, contracts and managers as Goffin and Dimitrov. Take the Belgian: we faced each other twice, with one win on each side, and I was ahead of him in the rankings. Yet he had a good contract, an agency that managed him and paid his coaches. Since he was a junior he traveled with coach and physical trainer. The same thing happened to Dimitrov, who at that time had already signed with IMG, Nike and Wilson. I am from El Salvador and I had nothing, not even a clothing contract. Even as a junior I always bought my own clothes. They didn’t even let me sign a contract even though I was No. 8 in the world.” The problem, for Arevalo, was the country of origin: in El Salvador there was no proper perception of the path needed to become a good player. “This cultural element prevented me from having the support I needed to become a professional. I ran out of money and the only possible choice was college.” A long time passed, anger and sadness were replaced by a healthy desire for redemption. And then, finally, things changed. Some time ago, the Salvadoran federtennis launched a program called “Tenis Alcance de Todos.“ “The project has been developing over the past year. The governing council has changed, now the president of the FST is my brother Rafael, who was a very good player (he faced Federer at the Beijing Olympics, ed.) and has the motivation to see as many Salvadorans as possible among the juniors and, why not, among the professionals. Things have been done in the last year that had never been seen in El Salvador: for the first time, public school children have been involved. Lessons are being given, tournaments are being held, finally there is space for the public. Before, only private entities were considered because they paid and the federation benefited. Now we are doing something different with children, with the goal of finding out if there is talent. In a couple of years we will see if a brood of good juniors has been created.” In the meantime, he will try to make his mark in Milan.