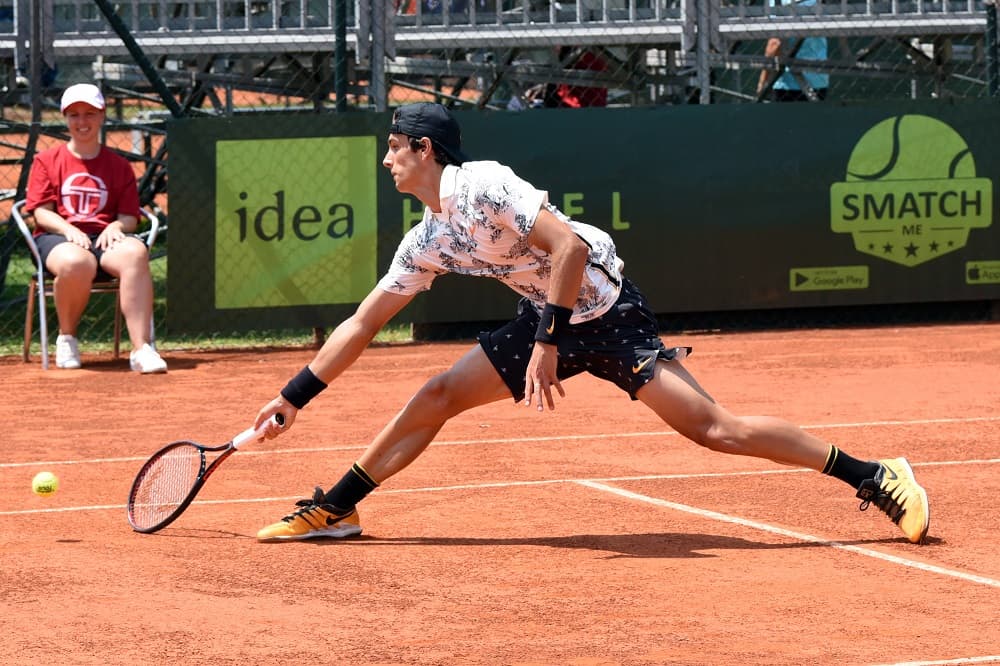 The glory of youth tournaments is definitely behind us. Now, for Lorenzo Musetti, it’s time to build. The 17-year-old from Carrara has definitely launched himself into the Challenger circuit, and the ASPRIA Tennis Cup – BCS Trophy (€46,600, clay) is a good opportunity to pick up points and improve a ranking that sees him at number 460. Under a blazing sun, in the bowl of the center court, he overcame Russian Pavel Kotov 7-6 6-3. He stayed on the court for nearly two hours, securing three ATP points and the chance to face (on Tuesday, in the big match scheduled no earlier than 6 p.m.) an established pro like Taro Daniel. “Kotov plays a bit strange tennis, he varies so much, it’s not easy to face him,” says Musetti, “I needed some time to understand him. That, combined with a bit of tension, caused me to lose the first three games. I recovered well, then I did well to win a very long 10th game, canceling several setpoints. That game gave me strength and confidence and I went to 6-5 and serve. There I suffered a break to zero. I did not like that situation, because the set should have ended 7-5. Fortunately, I responded well and in the tie-break I conceded only two points.” Even in the second, down one break, Musetti reacted well, showing varied and complete tennis. And, above all, with clear room for growth. “I had prepared well for the heat,” said the Carrara player, “days like that had already happened in Paris and Parma. I integrated well, I breathed correctly, I took my time between points. In these cases it is important to try not to take notice and not to allow it to become an excuse. We were indeed struggling, especially in long exchanges, but it is crucial not to let the opponent know that. I am satisfied with that: although I did not play a very good match, I struggled on all points.”

Five months have passed since Musetti began assiduously attending the professional circuit: the first balances will be made in a few months, but it is interesting to know the situation… “in the middle of the ford.” “I come from a period without too much conviction, although I play good tennis,” Musetti says, “in Vicenza and Parma, for example, I played quite well but lost in the first round without taking advantage of the chances I had. There was some regret, but I’m training well. Today I won without playing too well and that gives me some confidence for the rest of the tournament.” After a few months in the pros, Musetti is increasingly convinced of what differentiates them from juniors: consistency. “I’ve always maintained that and now I’m even more convinced. Professionals maintain the same level for three hours, while some juniors reach even higher peaks but then lack continuity and do not materialize. Since I have refined this aspect, things have improved,” says Musetti, accompanied in Milan by coach Simone Tartarini, “I give an example: in Barletta I faced a good top-200 ATP player, Filip Horansky. I played a magnificent first set and won it 6-1. He didn’t make a dent, I dropped a smidgen, and he took over. But not because I was playing badly: it was enough to drop a tiny percentage.” Speaking of goals, while not thinking much about it, Lorenzo would like to end the year around ATP number 300. “Or maybe just a little better, so I can pick up a few more points next year and play Slam qualifiers or some ATP 250s. Right now, my goal is to go as deep as possible in the Challengers.” The test against Taro Daniel (No. 103 ATP) comes at the right time to test a level that is getting higher and higher, just like the ASPRIA Tennis Cup. “The clubhouse is very nice, I had never been there. It is elegant, prestigious, I am really enjoying it. The organization is good and I was impressed with the quality of the gym.”