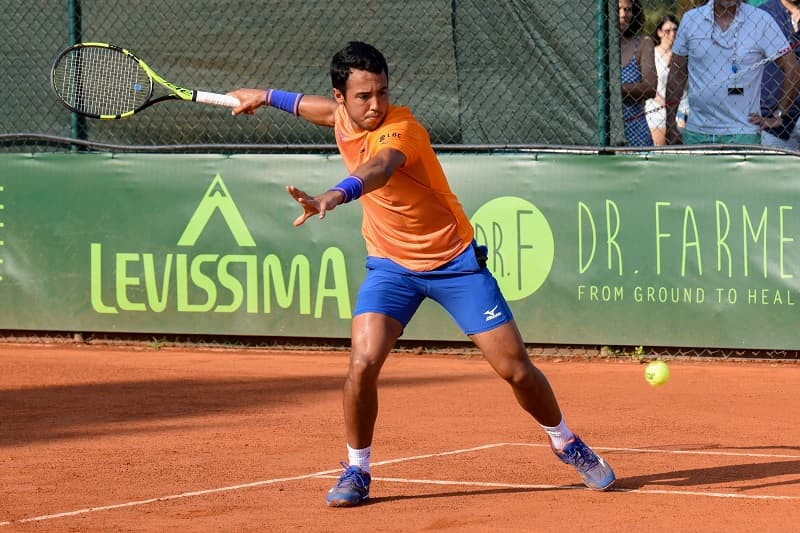 There is a reason that the psychological threshold of the ATP top-100 is seen as a wall to be knocked down. In the locker room at Challenger tournaments, or even more so at Futures tournaments, those who make it are seen as supermen or so. Hugo Dellien proved why, to himself, to Lorenzo Musetti and to the audience at the ASPRIA Tennis Cup – BCS Trophy (€46,600, clay) in the highly anticipated semifinal that drew hundreds of spectators to the ASPRIA Harbour Club. Playing as a top-100 player when he needed to, the Bolivian respected his first seed status and reached the final, where he will face Serbian Danilo Petrovic. A 6-2 6-4 that does not downgrade Musetti, author of a gangly match that – perhaps – could have turned in the second set. Tense, emotional (in the morning his parents Francesco and Sabrina had arrived from Carrara), Musetti found himself in the worst possible situation: on the one hand the inevitable tension of the first career semifinal and so many eyes on him, on the other an opponent with not so decipherable tennis. Kicking serve, a very heavy forehand, excellent athletic condition and an improved backhand represent the technical arsenal of the ATP number 93, who in less than 72 hours will play in Wimbledon against John Millman. Showing vivid professionalism, Dellien has not snubbed the Milan tournament, quite the contrary. Perhaps he will know the story of Laslo Djere, who 12 months ago found himself in a similar situation. He would go on to win in Milan (in the final against Gianluca Mager) and eight months later go on to win the ATP 500 in Rio de Janeiro, even moving into the ATP top-30.

Taking advantage of Musetti’s uncertainties, the Bolivian quickly took a 4-1 lead and closed out the first set 6-2. Musetti looked worried, as if he had a fear of “seeping” into exchanges above 8-10 strokes. Result? A few too many errors. In the second, the music changed. Musetti gained confidence and twice went ahead by a break (2-0 and then 3-1) and pushed to a reassuring 4-1. There was an air of third set, perhaps even of feat. Bunts, winning strokes and the long backhand (resplendent, the shot of the tournament) exulted the Milan crowd. But Musetti is a 17-year-old boy and, as such, subject to ups and downs. Ergo, he fell victim to a sharp decline that allowed Dellien to get back into the match. The last train passed at 4-3, when Lorenzo had a break point that would have taken him to serve for the set. He had managed to set up the exchange, but made an avoidable error. The match ended there, but Musetti’s journey certainly does not end. He leaves Milan with 29 ATP points in his pocket, a decent check and a lot of certainty for the future. He will start again in a very few days, at the Recanati Challenger. On goes Dellien, to the delight of a small group of Bolivian fans who have now taken on the role of good luck charms. At the end of each match, they gather with their idol for hugs and souvenir photos. He lends himself willingly, aware of the role he represents for Bolivian sport: apart from a few soccer players, he is the most important figure. And it is no coincidence that several sponsors appear in his competition attire.