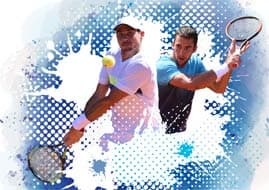 The spectacle of great tennis returns to the shadow of the madonnina with the fourteenth edition of the Aspria Tennis Cup trophy BCS, an ATP Challenger Tour tournament that will kick off next June 24 with the first weekend dedicated to qualifying on the Milanese courts of the Aspria Harbour Club in via Cascina Bellaria and will conclude on Sunday, June 30. The tournament, which will have a prize pool of $50,000.00 with hospitality, organized as usual by Makers, promises to be full of new features.

This year the main draw features the first novelty, 48 players will compete for the title, while the qualifiers will see only 4 players starting with only two places up for grabs for the main draw.

By virtue of these innovations, the tournament will have an overall duration reduced to seven days compared to nine in previous editions.

The spectacle will be guaranteed by the champions on the court, many top-level players, many of them with Top 50 backgrounds, ready to battle it out to win very important points, as Laslo Djere, Guido Pella, Filippo Volandri, Daniel Gimeno-Traver, Tommy Robredo, Albert Ramos Vinolas, Carlos Berlocq, Benoit Paire did in previous editions .

Admission to watch the matches will be free from the first round until the quarterfinals; on the last two days of competition, Saturday, June 30 and Sunday, July 1, there will be an entrance fee of 10.00 euros.
Tickets are on sale on the TicketOne circuit.
Tennis, entertainment, solidarity and attention to the environment, with a concrete commitment: the ingredients for a successful tournament are already there.